The latest in gun violence research and computer games 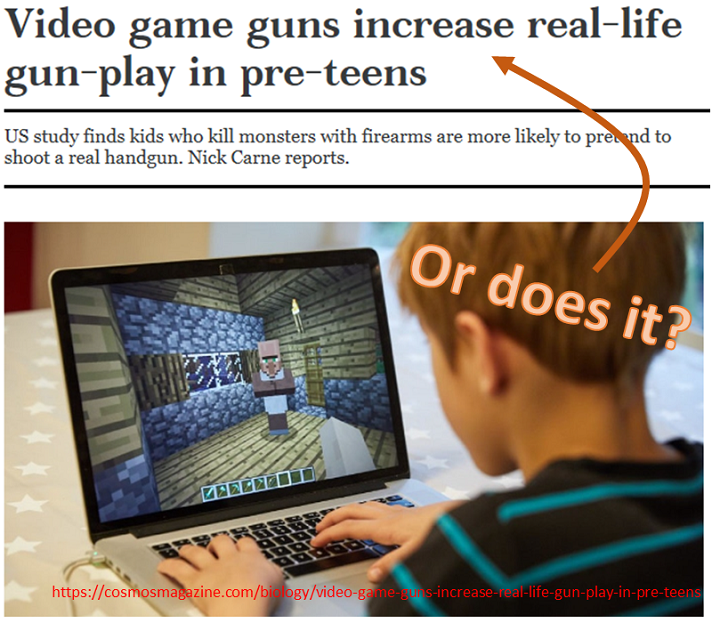 The history of children’s play is littered with examples of adults expressing concern over the negative impact of certain types of play. In the old days it was concern over things like spinning tops (I kid you not) but in a modern context the biggest fears are possibly about a presumed link between computer games with violent storylines and real violence. Not surprisingly it has formed the basis behind dozens of research papers.

Thing is, and this is not meant to be an insult, reading research papers is not straight forward; it is, almost literally, like reading something in a foreign language, and when the press get involved it can make things ten-times worse.

Take for example the coverage of a recently published paper. The ABC online news reported on this saying, “Even as questions about the relationship between violent video games and shootings have been asked with growing urgency, a dearth of good data has made it difficult to draw any definitive conclusions.” Despite this the story went on to say, “… researchers from Ohio State University claim to have found a link.”

Did they? I mean both did they find a link but also did they ‘claim’ to have found a link? I’ll give you a short cut: no, and no.

The US study looked at potential links between exposure to computer games with an element of weapon violence and children's use of firearms. Its brief is very carefully worded in that it talks of studying whether, “Exposure to violent video games increases children’s dangerous behaviour around real firearms.”

This ‘dangerous behaviour’ term seems to be a nuance that has not been picked up by much of the media reporting it. And yet the authors have some blame for this too because clearly the research does not support their own hypothesis.

First, let’s look at how the press have reported this story.

The online news service inews went with ‘Children who play violent video games more likely to exhibit dangerous behaviour’. So, they got the dangerous behaviour bit in; and the possibly more respected Reuters, went with the even more emphatic, ‘Kids who play violent video games may be more likely to pick up a gun and pull the trigger.’

Have you caught the clickbait yet? Just in case you have not, here’s another from Cosmos (‘the science of everything’): ‘Video game guns increase real-life gun-play in pre-teens’. (see the screenshot above).

The published paper, titled ‘Effect of exposure to gun violence in video games on children’s dangerous behavior with real guns’, was written by Justin H Chang and Brad J Bushman. It concludes that children in the lab who had previously played a computer game containing elements of either gun play, sword play or neither behaved differently on subsequently discovering a real gun in a situation without adults present.

First, despite the 60% figure being statistically significant, around half of those playing the non-weapon version of the computer game still picked up the real firearm. A point that most of the press reports seem to have left out.

Of more significance, though, are a couple of points raised in the papers conclusion. One being this,

“While each of the outcomes [in the study] point in the predicted direction, some were nonsignificant, perhaps because of insufficient statistical power.” Oh dear. Let me translate that for you from researchese into proper English: in means, ‘we are convinced that our results show what we predicted although they are not actually strong enough to prove it with scientific reliability’.

There are some parts of the study that prove more interesting, though. For example, the authors say,

“Our study highlights another danger of violent media exposure: it increases dangerous behavior around firearms. Specifically, exposure to violent video games can increase a child’s interest in firearms, including shooting a handgun at themselves or others.”

What do we conclude from this

What this study has shown is not that children become more violent as a result of playing some computer games but that some may become more inquisitive about real firearms if they happen to find them – a point the authors address only in the very final sentence of the paper. The implications of this should be obvious, and concluding that such games increase violent behaviour is not one of them.

The important point here, in a research context, is that one study producing a given result is not enough from which to draw legitimate conclusions. It takes consistent and verifiable findings across a significant number of studies to be able to do so. Despite the claim in the ABC News piece about a dearth of research on this topic there are in fact hundreds of such studies available to read. The bulk of these have simply failed to find such a consistent link. A point noted on even in this latest research.

There are three broad conclusions we can reach from this: either, more study is required because there legitimately is a link but we just have not found it yet; or that such a link does not exist; or that something else is the issue. This latest study does point to the real cause behind this issue but it is not the one grabbing the headlines, probably because the authors themselves seem to be down-playing it.

It is right to point out that every year children accidentally kill or seriously injure themselves and others around them with firearms in alarming numbers and so this is a topic worthy of serious discussion. Yet, it is also true to point out that this issue affects children in the U.S. far more than in any other part of the world.

The rate of children and young people killed by firearms in the U.S. is more than 36 times higher than in comparable industrialised countries. This figure includes a quite disturbing number of accidental shootings, and there is a simple reason for that.

Children in the USA are involved in firearms incidents in such numbers not because of any demonstrable influence from computer games but more likely because they have access to guns in a way that is not the norm around the rest of the world. The number of guns in civilian hands in the US is greater than the number of people living in the country, a proportion that is way higher than any other country on earth. Teach children responsibility around firearms, I hear you say. Fine, yet this study suggests that having children take safety courses in firearms is just not enough to keep them safe, and is possibly quite the reverse.

The real issue here is that no matter how many precautions gun owners take over the safe storage of their firearms, the sheer number of them increases the possibility of children gaining access to them. That is the ‘something else’ that needs addressing as clearly children cannot keep their natural curiosity in check over this issue or any other. Sort that one out and then we can talk about the effect of the computer game.

For further information on tracking the number of and circumstances behind firearms deaths involving children see the online Gun Violence Archive.

Photo - screen shot from the Cosmos article mentioned above reproducced under the 'fair use' rules. The 'Or does it' is my addition.