Playing, obesity, well-meaning adults, a bit of history and a dose of reality

Good advice is not always guaranteed to be listened to.

The approach that often well-meaning campaigns, such as the latest Irish ‘Let’s take on childhood obesity’ campaign, adopt in relation to children playing often leaves me cold.

This current Irish campaign takes on the slogan ‘Bring Back Play’ and helpfully lists a number of good old favourite games that parents should reintroduce to their children. Games such as, ‘Duck, Duck Goose’, ‘Kerbs’, and ‘Kick the Can’. It asks parents to, “Introduce your kids to the games you played at their age [which] is a great way for everyone to get exercise and have fun."

I find this insulting

Initiatives like this promote the idea that if, and I emphasise here, if children are not playing enough to maintain a healthy weight then it is clearly their own fault. It seems that all we need do is just encourage them to start playing and Bob’s your uncle: fit kids!

As well as insulting this approach is also ignorant on a number of levels as it assumes that children obviously don’t already know these ‘traditional’ games so need to be taught them. This is completely at odds with the reality of children’s daily lives and ignores the very nature of how play works and how childlore in the form of games and playforms are transmitted down the generations.

Me, I’m annoyed and insulted at such campaigns but those who initiate them should be embarrassed. As penance I think they should be forced to wear a sign around their necks for a whole year that reads, ‘I am attempting to fix something of which I know nothing.’ 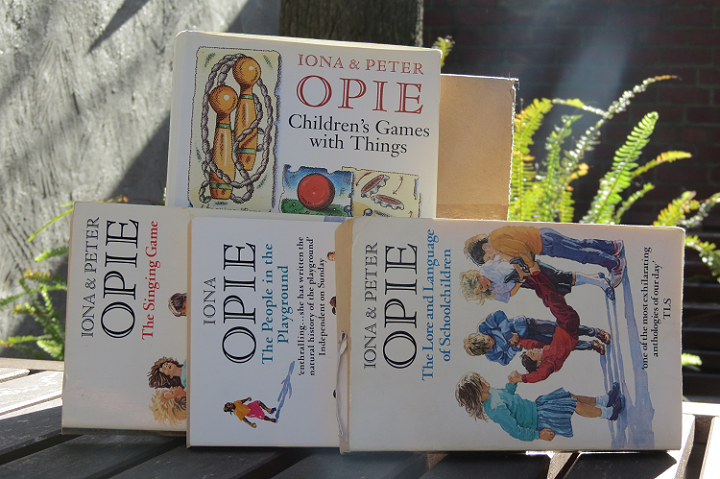 ​photo: those who dont know their history are bound to repeat the failures of the past - so read a book

There are and have been of course a number of similar initiatives that have not taken this negative view and it is noticeable that this is often down to the knowledge of those involved in crafting them. But good advice is not always guaranteed to be listened to.

I was once invited to present to a team meeting in a department of a certain not-to-be-mentioned university in Wales (but didn’t we have a lovely time on our day trip there). They were in the process of developing a psychology/physiology based project that would reward primary school children with vouchers and trinkets for being ‘physically active’ during their playtimes and lunchtimes at school.

The team said this was important because it was these periods of the day in which children had become inactive whereas they had once been full of beans. They engaged me because they were keen to learn what ‘traditionally’ active games they could reintroduce to the playground via coaches and laminated cards as they firmly believed these forms of play had died a death and that bribes (sorry! incentives) could be used to revive them.

Didn’t we just hear this above?

During an hour long briefing session full of video, photographic and historical evidence it was pointed out how inaccurate this view was of the modern school playground and it concluded by pointing out that the average amount of time given over to these freely chosen periods of the school day had been halved in recent years suggesting that maybe a tactic for increasing physical activity might simply be to lengthen them again.

Moreover, it was suggested that increasing the time spent in more active forms of play and games with artificial rewards might remove time for equally important yet less physically active forms of play, like the cognitive stuff for example. The reaction I got was along the lines of, ‘Hmmmm, very interesting’ but it was in one ear and out of the other. I never heard from them again yet the now well-funded programme went ahead anyway with its operant conditioning.

No doubt this project could go on to provide compelling evidence of its success but then, you see, there’s another slight problem: interpreting the evidence. For example, some years ago I prepared an independent evaluation of a nation-wide (England) project that involved providing schools with a large bag of sports-type play equipment and a series of laminated cards with instructions for games that could be played with each equipment type. The bags had been developed from a series of similar sports bags themed around rugby and cricket. The plan was for school staff (mainly the non-teaching lunchtime assistants) and trained child-coaches to deliver the games they contained in a timetabled session over the lunchtime and thus raise activity levels. 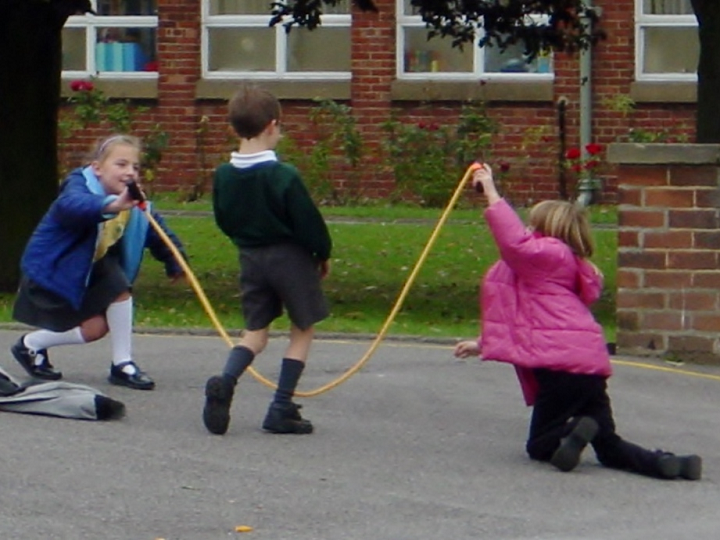 photo: children without an adult or laminated cards apparently 'not' playing physically

Sure enough, it did seem to raise activity levels among those who took part. However, it soon became apparent that where the bags were proving most successful in encouraging children to make use of their contents was when this policy and the laminated cards were ignored and a school just plonked the open bags on the playground for people to take their pick, or not, of the goodies inside.

This was resulting in more children using the equipment than the more structured approach. In other words, what children in the evaluation schools seemed to need to extend their playing was not the involvement of ‘coaches’ or cards to introduce them to new and long-lost games but just stuff. Unfortunately, that finding was apparently outside the brief of the evaluation so didn’t seem to merit a mention in the final report.

Rather than campaigning or actively attempting to ‘Bring Back Play’ with children we would all be better served by a campaign to “Stop-Adults-from-Stopping-Children-from-Playing-when-they-Need-to-Because-Unknown-to-You-Well-Meaning-Folk-they-Already-Know-How-to-Bloody-Well-Do-It-if-you-just-Give-Them-Some-Space-and-Time-to-Get-on-with-It” kind of campaign.

As the Opie’s once said, those great collectors of children games and play in the latter half of the twentieth century, (and I paraphrase here) ‘The best thing we know that kills playing stone dead is the involvement of an adult’.

Quite. Perhaps we could add the words ‘well-meaning’ and ‘ignorant of reality’ to that list too.