Everyone runs away from home at least once 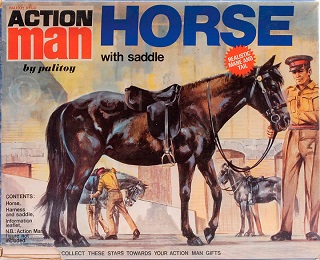 I remember reading once that two of the most consistent experiences among young children is that at some point they believe that their parents are not their real parents, and that they attempt to run away from home. This is certainly true in my case, although I have to admit that as I was adopted from a very young age the first one kind of doesn’t count. But I do distinctly remember an attempt to run away from home.

When I was six, my father and I moved in with my grandmother on dads side for almost a full year. I learnt many years afterwards that this was because my mum was very seriously ill and spent most of that year in hospital.

We had Christmas there and I had prepared my wish list for Santa. It included a dozen Action Men (GI Joe for our American friends) as well as an Action Man tank. What I got was a lousy single Action Man in an ancient cavalry costume and a horse. I was livid.I packed a small brown leather suitcase and then I was off.

I remember walking down the long never-ending street that granny lived on being not upset but very angry. Then, my dad suddenly appeared alongside driving our old ex-army Moggie 1000 very slowly, his head sticking out the open window.

He never said a word, he just continued driving until eventually I stopped and got in. When we got back to granny’s I sat and unpacked the suitcase that I had filled with my most precious things, including a colouring book, my slippers, ‘Rabbit’, and that Action Man with the silly cavalry costume.

For details and tickets for the current PD tour see