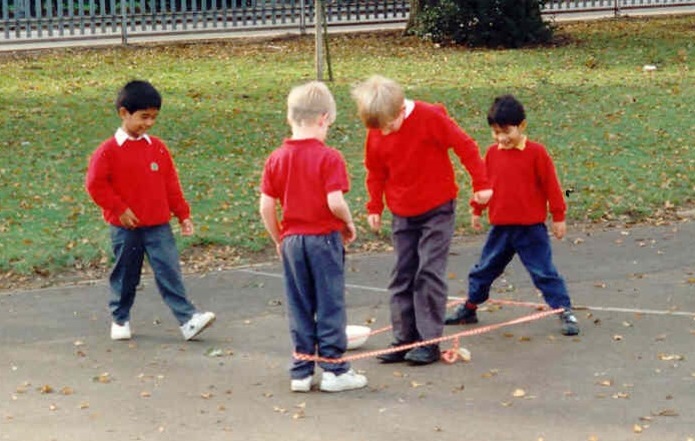 Back when I was still living in my home city, I had an apartment above the regional BBC radio and tv studios. Largely because of that I used to be called on as a guest on local shows quite often, especially on the radio (I think they considered me a cheap turn because I lived so close).

On one occasion, I was asked to take part in an afternoon call-in programme on the radio. In regional and local media ‘call-ins’ have a well-deserved reputation of being terrifyingly unpredictable but the theme was about memories of skipping games so I felt confident enough. I had been invited onto this one because of a recent project I had been doing in local schools on skipping games which had received a fair bit of coverage in the local press, and topics like this are the bread and butter of local radio.

The programme started with a pre-recorded interview with me talking about the history of skipping that had been recorded on a school playground with the sounds of playing all around; it then segued into a studio chat and then followed the live phone in.

In the studio part of the programme we talked skipping games in general but we highlighted one particular form of skipping which is technically called ‘elastic’ or ‘fixed line skipping’. This is a fancy term for using a loop of elastic instead of an open ended rope. It is called various things in different places the most common of which includes the names ‘French Skipping’, ‘Chinese Skipping’, ‘England, Ireland, Scotland, Wales’, or plain ‘Elastics’ among others. The best name I ever heard it called, though, was in a primary school in East Yorkshire where it was universally known as ‘Twang’.

Where did the game come from?

I pointed out that the game was also often called ‘American Skipping’ which matched the idea that it was believed to have made its way to the British Isles via the children of American Air Force personal in the 1960s. However, my own fieldwork had found examples of it in the UK from at least the early 1950s.

Interview done, I sat back sipping my cup of BBC coffee and listened to the calls coming in. One of them took me and the programme staff aback a little.

A very irate woman came on the line and pointed out that I clearly didn’t know what I was talking about because she remembered playing this game as a child in the early 1930s. She explained how her mother would make the rope for her by stitching together lengths of wide knicker elastic into a loop, and also said that she knew the game as ‘Chinese Skipping’. She even recounted some of the rhymes she remembered playing and they were very similar to the modern ones that we had played in the recorded interview earlier.

That caller was my mother which became obvious the more she struggled to continue talking without bursting out laughing.

I should probably explain at this point that she was my adopted mother and was a generation older than you might expect, hence the childhood in the 1930s. It also turns out that she may have had a point.

The Opie’s collection of ‘Games with Things’ (written by the great folkloric collectors Iona and Peter Opie but published after this radio show aired) concluded that although there was a wave of ‘American Skipping’ in the UK in the 1960s the origins of the game were older and not American.

The oldest record they had for this form of skipping came from Shanghai in the early 1930s, which might obviously count for the game often being called ‘Chinese Skipping’. Interestingly, my home town has had a sizeable ethnic Chinese population since the mid-19th century. So, my mother’s story is more than a little plausible.

The moral of this tale is clearly that if you have a question about any subject whatsoever, ask your mother first. That and never let her near the telephone during the day.

The photo above was taken by Marc on the Skipping Project mentioned in the text in 1990/91.

Comments and shares welcome here or on social media.