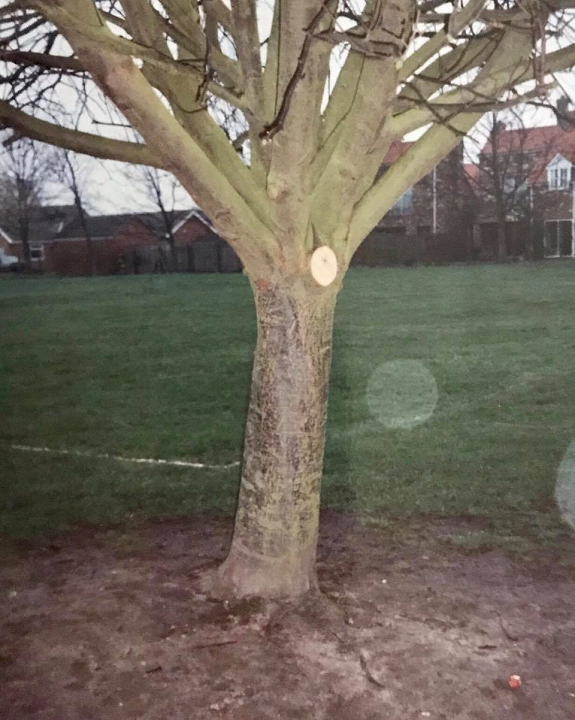 This photograph has a story behind it that served as a great learning lesson to me back in the early 1990s - one that has stayed with me from that day.

I had done a play audit at a primary school as the first stage of a longer development project aimed at enhancing the play opportunities for children at this school. In it, various groups of children had taken me around the grounds to show me what they did and where. An important element of that was identifying the most popular spots to play which are often obvious as they are given special names.

The children at this school told me about ‘The Swinging Tree’. It was right at the back of the school field and was called this because there was one branch in particular that was at just the right angle and height to produce a great place to swing. I included a note about this when delivering the report of the play audit to the staff at an after-school meeting the following week complete with slides.

The photograph shows what I found on my next visit to the school. That was a hard lesson to learn.

Some time after this incident, I turned up at another primary school I was working with ready for the next planning session to be met by a group of children already waiting for me at the school gates. Before I even had a chance to get off my bike, they were dragging me into the grounds all excitedly trying to tell me something at the same time.

“The trees, the trees”, they were all saying, “something has happened to the trees!”

They led me to an area that had already been identified on the play audit as an important place for them. Again, this area had a name: they called it ‘The Trees.’ Brilliant. Another purely descriptive name (there’s a pattern developing).

Unlike the larger tree in the first example, this was a line of about seven or eight miniature fir trees running along a path by the side of the school buildings. In this area, people collected small berries and twigs (from the trees) to use in making potions and spell making; the one and only hole on the school grounds used regularly as ‘the cauldron’ for mixing the potions was here too between two of the trees. The ‘witch’ lived in this area as well and she was a key character in this form of playing.

Once we got there, the children pointed at the trees and told me in unison, “Look, look! The trees are bleeding!” And sure enough, they were.

Each of the trees had a distinct blob of bright red on its trunk that was dripping like a bloody wound in a bad Hammer House of Horror film. The children were amazed by this. I was worried because I knew what it meant.

They were felling marks, in other words, these trees had been marked to be cut down.

I didn’t tell any of the children this but expressed similar amazement about ‘the bleeding trees’ before heading into the school to ask the staff if I was right about the paint marks. I was.

The headteacher told me that the trees were to be felled to allow more natural light into the classrooms on this side of the school. A perfectly reasonable idea, possibly, but after my experience with ‘The Swinging Tree’ I think a frustration that had been building up in me came to a boil and I launched into a spontaneous and passionate defence of ‘The Trees’.

I pointed out the importance of special names given to special places; the continuity of use of these special places over generations of children; the existence of the cauldron and potion mixing, emphasising the role of this kind of play in language development; and finally, the unfairness of adults changing the physical environment without any consultation with children who after all are the principal users of it. It just burst out of me in a breathless outpouring.

In fact, the Headteacher looked rather taken aback.

Finally, he said “Erm. OK. We’ll have a rethink on that one, then.”

What I Had Learnt Was Wrong

At first, I thought the learning lesson in the first incident was to simply not include anything that came up during the play audit that I thought might be taken in a negative light, which is a tactic I adopted. The second example made me realise that this was not the right approach.

Over the years I have been able to work with more than seven-hundred schools on projects like this and in most of them the school staff have received the results of their play audit with nothing less than a fond interest and at times amazement. So, examples like those in the first school have been rare.

What has been more common, though, has been a genuine concern over forms of playing that some might perceive as risky or odd, not realising that these things are general and not unique to their school. That does mean that even the most receptive of schools can interpret parts of their play audit in a negative light and at times can even be a bit sceptical. That can lead to some poor interventions on their part.

It occurred to me that recording what, how and where children played certain things in their school grounds and using that knowledge to create more and better opportunities for their playing was not enough. I had to use that knowledge to be an advocate for children and their play, to be prepared to defend their playing and ensure that it survived on their terms. What needed to go together with collecting this information was ensuring that schools actually understood it.

As a result, the delivery of the play audit became as much a lesson in the history, folklore, and culture of children’s play as it was as an exploration of what children were playing today. Weaved subliminally into that delivery also came a message about the need for caution and respect on the part of adults in what to do with this knowledge.

Implicit in this came the point that now I had finished watching in detail what the children were doing my focus had now shifted to watching just as closely at what the adults were going to do next.

As a postscript, the second school never did cut down ‘The Trees’ but on a re-visit more than five years later that name for the area had fallen out of use. It had been replaced by a new name and that was, ‘The Bleeding Trees’, even though the paint blobs had long since faded away.

Playworker and advocate for children and their playing

Marc Armitage is a consultant, researcher and writer in play, playing and playwork. He has been a profesional Playworker for more than thirty-years and freelance since 1989.

He regularly travels the world speaking to groups of professionals from a broad spectrum of work sectors in the children and young peoples workforce including playworkers, early educators, primary and secondary school teachers, out-of-school people, parks and playground designers, politicians, policy makers and many others.

He also spends a lot of time talking with children. With. That's the key word.

“In play a child always behaves beyond his avarage age, above his daly behaviour. In play it is as though he were a head taller than himself.”

WHERE AM I NEXT?

If you can think of others that you feel I should be following please let me know.